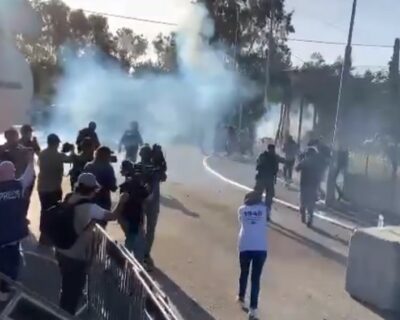 Israeli soldiers attacked, on Saturday evening, many Palestinians, including journalists, during a nonviolent activity in solidarity with the families of Sheikh Jarrah neighborhood, in the occupied Palestinian capital, Jerusalem, threatened with displacement by Israel for the benefit of illegal colonialist settlers.

They added that the soldiers also dragged several protesters and took them to the main entrance of the neighborhood, where the army placed concrete blocks to isolate it, more than two weeks ago. The soldiers also attacked many journalists, shoved them, and pushed them away in addition to assaulting them with batons to prevent them from performing their duties.

On Saturday at night, the soldiers abducted a young Palestinian woman, identified as Bara’ Salayma, in Sheikh Jarrah, and took her to an interrogation facility, the Quds News Network said.

In addition, the soldiers invaded and violently searched many Palestinian neighborhoods in Sheikh Jarrah.