Army Injures Several Palestinians, Including A Medic, In Al-Biereh 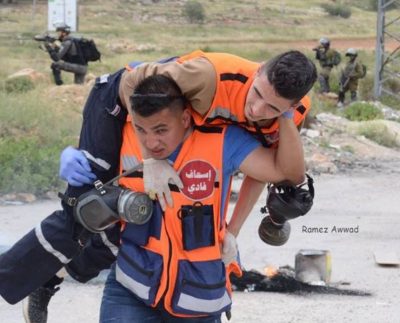 Israeli soldiers inured, Friday, several Palestinians, including a medic, after the army attacked protesters near the northern entrance of al-Biereh city, in the Ramallah and al-Biereh Governorate, in central West Bank.

The soldiers, stationed at the permanent roadblock near Beit El colony military and security center, fired rubber-coated steel bullets, gas bombs and concussion grenades at dozens of protesters, who marched in the area.

Medical sources said many Palestinians suffered the effects of teargas inhalation, while a medic was shot with a rubber-coated steel bullet in his leg.