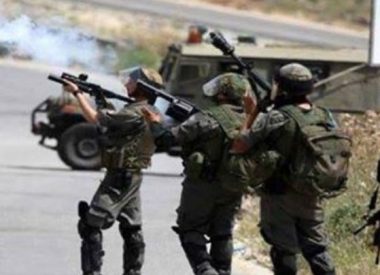 Dozens of Israeli soldiers invaded, on Monday at dawn, the town of Qabatia, south of the northern West Bank city of Jenin, violently searched many homes, stores, a fuel station, Bank Of Palestine and Qalqilia City Council, in addition to causing dozens of Palestinians to suffer the severe effects of teargas inhalation.

Media sources in Jenin said the soldiers were heavily deployed in many neighborhoods and alleys in Qabatia, before storming the ransacking homes and shops, causing excessive property damage.

Owners of some of the invaded homes have been identified as Riyad Abu ar-Rob, Mahmoud Baddour, and Ahmad Awad Torabi.

The soldiers also broke into Bank Of Palestine, and Qalqilia City Council, causing serious property damage, before confiscating their surveillance recordings and equipment.

Medical sources said many Palestinians suffered the effects of teargas inhalation, after many local youngsters hurled stones at the invading soldiers, who fired gas bombs and rubber-coated steel bullets.

It is worth mentioning that the soldiers also invaded Zibda town, southwest of Jenin, before breaking into the home and store of a local, identified as Ibrahim Zeid, and confiscated surveillance tapes and equipment.