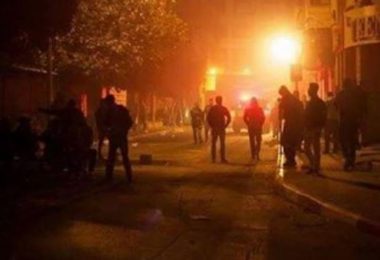 Israeli soldiers invaded, on Wednesday evening, the town of Abu Dis, east of occupied East Jerusalem, in the occupied West Bank, and clashed with local youngsters, wounding one, and causing at least eleven to suffer the severe effects of teargas inhalation.

The soldiers invaded the town from several directions, and drove around its neighborhoods and main streets, leading to clashes with local youngsters, who hurled stones at their armored vehicles.

Medical sources said a young Palestinian man suffered a moderate-but-stable injury, after the soldiers shot him with a rubber-coated steel bullet in his mouth.

They added that at least eleven Palestinians received treatment after suffering the severe effects of teargas inhalation.