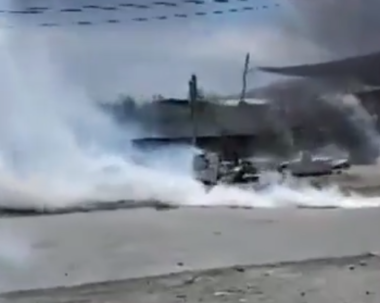 Israeli soldiers attacked, on Tuesday evening, a nonviolent procession near Nablus, in northern West Bank, causing many Palestinians to suffer the effects of tear gas inhalation, in addition to shooting one journalist in the leg and causing damage to an ambulance.

Media sources said the soldiers attacked the Palestinians who marched in condemnation of a new segregated road for the illegal  Israeli colonialist settlers, which was constructed on Palestinian lands owned by the residents of Beita and Huwwara, south of Nablus.

They added that the soldiers fired a barrage of gas bombs and concussion grenades at the nonviolent protesters, causing many injuries, in addition to targeting a Palestinian Medical Relief ambulance with a high-velocity gas bomb, shattering its windshield.

Among the injured was a journalist, identified as Mohammad Turkman, who was shot with a high-velocity gas bomb in the leg.