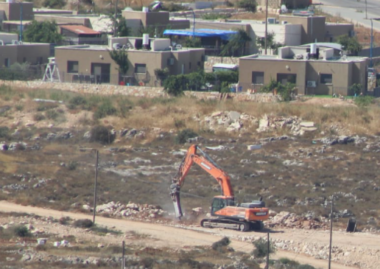 Israeli soldiers bulldozed, Tuesday, large areas of Palestinian agricultural lands, owned by the residents of Jaloud town, south of the northern West Bank city of Nablus, to prepare for expanding an illegal colony.

He added that the lands are owned by the residents of Jaloud and are in Basin #13 in the al-Khafafeesh area.

Daghlas also stated that Israeli is planning the expansion of eight illegal colonies and outposts, built on stolen Palestinian lands in the southern areas of Nablus.

In related news, the soldiers attacked, on Tuesday evening, a nonviolent procession near Nablus, causing many Palestinians to suffer the effects of tear gas inhalation, in addition to shooting one journalist in the leg and causing damage to an ambulance.