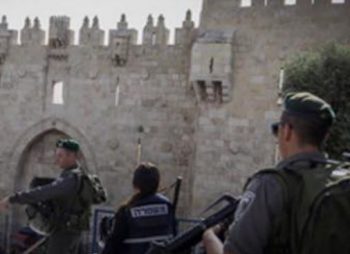 The six Palestinians were walking in Bab Hatta before the soldiers surrounded them, and started beating them up with clubs and batons, and even with their guns, causing them to suffer various cuts and bruises.

Palestinian medics rushed to the scene, and moved the six young men to the al-Makassed hospital, in Jerusalem.

The six were still in their training shorts and suits when the soldiers assaulted them, just as they exited a playground following training.

On Wednesday morning, a number of Israeli extremists invaded the courtyards of the Al-Aqsa Mosque accompanied by several undercover officers.

Eyewitnesses said at least 65 extremists, accompanied by many soldiers and officers, invaded the mosque’s courtyards, and conducted a provocative tour, causing tension.