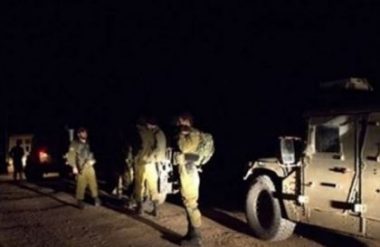 Israeli military sources have reported, late at night Wednesday, that one soldier was shot and injured by Palestinian gunfire, after the army invaded the northern West Bank city of Nablus.

The sources said the soldier suffered a moderate injury, and received the needed treatment before he was moved to an Israeli hospital.

The shots were fired after a number of Israeli military vehicles, and buses, transporting colonists, invaded Nablus and headed towards Joseph’s Tomb, near Balata refugee camp.

Many local youths hurled stones and empty bottles at the invading vehicles, and apparently, a number of armed fighters also opened fire on the military forces, wounding one soldier.

In related news, the Israeli army kidnapped, at dawn Thursday, at least six Palestinians in the occupied West Bank, including three in Hebron. The army claimed the kidnapped Palestinians are members and supporters of Hamas.