324 Days After His Death, Family Of Slain Palestinian Manages To Bury Him 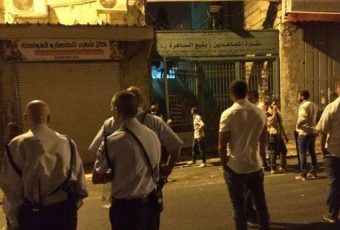 A Palestinian family from Jerusalem managed, on Thursday at dawn, to hold a funeral and burial ceremony for their son, who was shot dead by Israeli soldiers 324 days ago, after he, and another Palestinian, reportedly killed three Israelis in Armon Hanetziv colony, built on Palestinian lands in Jabal al-Mokabber town, in Jerusalem.

The Israeli army imposed severe restrictions and installed many roadblocks, in addition to preventing the Palestinians, and journalists, from documenting the funeral and burial ceremonies, at the Mujahidin Graveyard, in Salaheddin Street, in Jerusalem.

The Israeli military only allowed 25 Palestinians to participate in the funeral, after subjecting them to extensive and provocative searches, in addition to confiscating their phones.

The Israeli military and security forces have tried, for several months, to pressure the family of Baha’ Oleyyan, 22, into burying their slain son in previously determined locations, including the West Bank, and tried to limit the number of funeral participants, but the family kept rejecting the Israeli preconditions.

Baha’s father said it was very difficult for the family to identify their slain son, especially due to postmortem issues, including skin color, face and eyes, and added that the corpse was not frozen, but very cold.

The Wadi Hilweh Information Center in Silwan (Silwanic) said the soldiers imposed a very strict siege on all roads surrounding the graveyard, especially Salaheddin Street, Sahera Gate and Sultan Suleiman Street, and prevented the Palestinians from entering these areas for more than three hours.

It added that undercover forces of the Israeli military were also extensively deployed in the area, especially on junctions and roads leading around the graveyard, in addition to closing the Sahera Gate.

The soldiers also assaulted many Palestinian journalists, violently removed them from the Sahera Gate and Salaheddin Street, and forced them to stand in the Tribes Gate area.

Following the funeral, the soldiers assaulted many family members, including Baha’s father, and refused to allow him to talk to the journalists who had to stand far from Sahera Gate and Salaheddin Street. Eyewitnesses said the soldiers also fired several concussion grenades and sound bombs at many Palestinians, and prevented them from even approaching the Oleyyan family.

Israel claims that Elian and another Palestinian killed three Israelis, after one of them grabbed a gun from a bus passenger and began shooting.

Israel is still holding the corpses of twelve Palestinians, who were killed since October 1st of 2015, two of them are from Jerusalem.