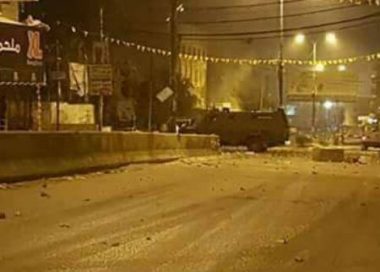 Palestinian medical sources have reported that Israeli soldiers shot and injured, on Wednesday at dawn, at least six Palestinians, after the army invaded Qalandia refugee camp, north of occupied Jerusalem, and prevented journalist and medics from entering it. The soldiers demolished structures and causing fires in a truck and several cars.

The invasion was carried out by several army vehicles and jeeps, before the soldiers clashed with local youngsters, who hurled stones and empty bottles on the invading military vehicles.

The soldiers fired dozens of live rounds, rubber-coated steel bullets and gas bombs, wounding at least six Palestinians, while many others suffered the severe effects of teargas inhalation.

Palestinian Red Crescent ambulances, and fire trucks, rushed to the refugee camp, but the soldiers prevented them from entering it. During the invasion, the soldiers demolished sheds and structures used for commercial purposes and as carwash facilities, under the allegation of being built without permits.