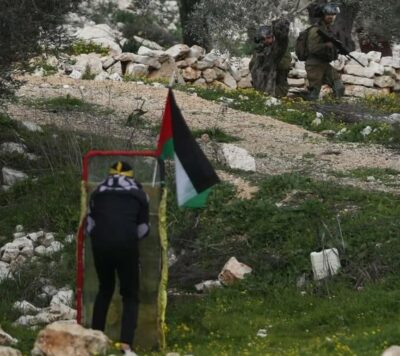 On Friday, Israeli soldiers injured ten Palestinians, including a child, during the weekly procession in Kufur Qaddoum, east of the northern West Bank city of Qalqilia.

Morad Eshteiwi, the media spokesperson of the Popular Committee in Qalqilia, stated that dozens of Palestinians gathered in front of Omar Bin al-Khattab mosque following noon prayers and marched while chanting against the escalating Israeli violations.

He added that the Palestinians chanting against the Israeli occupation and marched in condemnation of the killing of three young men, who were assassinated by undercover Israeli soldiers in Nablus, in northern West Bank, this past Tuesday.

The Palestinians also marched in solidarity with cancer-stricken Palestinian detainee Nasser Abu Hmeid, held by Israel and is in a severe condition.

Israeli soldiers attacked the protesters with many rubber-coated steel bullets, gas bombs, and concussion grenades, wounding ten, including a child, and causing scores to suffer the effects of tear gas inhalation.

In 2003, the Israeli occupation authorities closed the town’s main road to local Palestinians and granted full access to the colonial settlers, especially those living in the illegal Kedumim colony built on confiscated Palestinian lands.