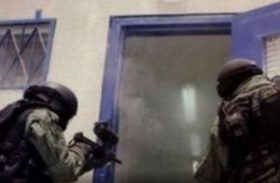 The Palestinian Prisoners Society (PPS) said the soldiers invaded section three, where at least 120 Palestinian detainees are held, and used excessive force in removing them out of their rooms, while beating them with batons.

The soldiers also hurled several gas bombs into the rooms, to force the detainees out, leading two scuffles between the heavily armored soldiers, and the detainees.

Three detainees suffered various cuts and bruises; one of them has been identified as Mahmoud ad-Dahnoun, while many others suffered the effects of tear gas inhalation.

Nafha has been witnessing increasing tension, especially after the Prison Authority transferred many detainees into different parts of the facility, and two days ago, the soldiers turned Section 12 into solitary blocks.