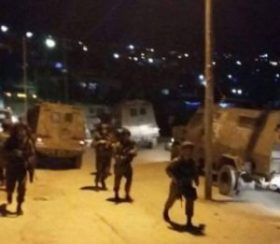 A large military force invaded, on Wednesday at dawn, Yatta city, in the southern West Bank district of Hebron, broke into homes and injured a child after firing a concussion grenade that exploded near him.

The invasion into Yatta was carried by dozens of soldiers, accompanied by a number of armored bulldozers, before the army broke into homes, and surrounded the homes of the two Palestinians behind the shooting attack in Tel Aviv, which was carried out June 8th, leading to the death of four Israelis.

The soldiers interrogated many Palestinians while searching their homes and properties, and tightened the siege that was imposed on Yatta since last week.

Eyewitnesses said the soldiers informed the family of Khaled Makhamra of their intention to demolish  their home this coming Monday.

The Israeli siege on Yatta is an illegal act of collective punishment denying approximately 120.000 Palestinians of their basic right of Freedom of Movement.