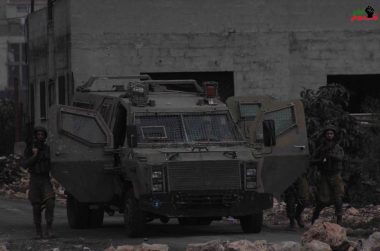 The procession started directly after Friday noon prayers, when dozens of Palestinians, Israeli and international peace activist marched chanting for the liberation of Palestine, and for supporting all efforts that would lead to the establishment of a free and independent Palestinian state, and an end to Israel’s colonialist activities.

Morad Eshteiwi, the media coordinator of the Popular Committee against the Annexation Wall and Colonies in Kufur Qaddoum, said dozens of soldiers invaded the town and fired life rounds and rubber-coated steel bullets at the protesters.

He added that the army injured three Palestinians before Red Crescent medics provided them to the needed treatment.

“The town sounded like a war zone due to the excessive amount of live ammunition used by the soldiers while invading it,” he said, “The army also tried to ambush the protesters in a vacant home, but their hideout was uncovered fast.”

The Palestinians, accompanied by Israeli and international peace activists, have been protesting in Kufur Qaddoum for more than fourteen years, demanding the army to reopen the town’s main road which was completely closed to enable easy access to colonist settlers driving to and from Kidumim illegal colony, built on privately-owned Palestinian lands.