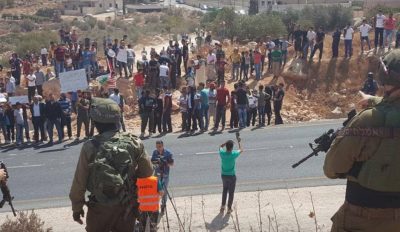 Medical sources said many Palestinians, including several journalists, suffered the effects of teargas inhalation in Khirbit Falqas area as dozens marched demanding the army to reopen the road which links it with Hebron city.

The road has been blocked by the army for the past seventeen years, an issue that forces the Palestinian to take alternative unsafe roads, leading to dozens of accidents.

In addition, the soldiers also used excessive force against nonviolent protesters in Bas az-Zawiya area, al-Manara Junction and Ibin Rushd Street, in Hebron city, causing many to suffer the effects of teargas inhalation.