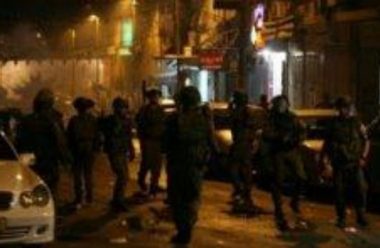 Dozens of Israeli soldiers invaded, on Saturday at dawn, the West Bank city of Bethlehem, and ‘Aida refugee camp, north of Bethlehem, searched many homes and summoned two young men for interrogation.

The soldiers also invaded and searched homes in ‘Aida refugee camp, leading to clashes with dozens of youngsters, who hurled stones and empty bottles at them.

The army fired many live rounds and gas bombs during the invasion and clashes; no injuries were reported.