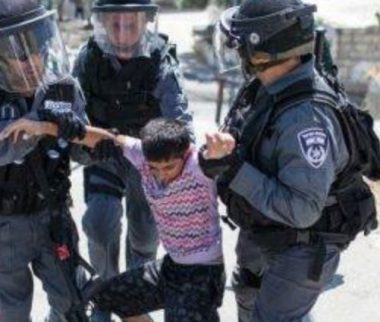 Israeli soldiers abducted, Saturday, three Palestinians, including two children, in two separate incidents in Hebron city, in the southern part of the occupied West Bank, and installed roadblocks in the city and two nearby towns.

The Palestinian Prisoners’ Society (PPS) has reported that the soldiers invaded Tal Romeida neighborhood, in the center of Hebron city, and abducted Ma’moun Hussein Natsha, 19.

The army claimed the young man “carried a knife.” Natsha, who did not attempt to attack the soldiers, was cuffed and blindfolded before he was moved to an unknown destination.

On Saturday morning, the soldiers invaded Bab az-Zawiya area, in the center of Hebron city, and abducted two children, identified as Salim Mohammad Sammooh, 14, and Hamdi Khalil Qawasma, 14, before taking them to an unknown destination.

In related news, the soldiers installed many roadblocks in several neighborhoods in Hebron city, and the main entrances of Sa’ir and Halhoul towns, before stopping and searching dozens of cars, and interrogated many Palestinians while inspecting their ID cards.