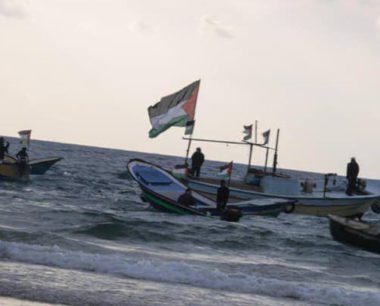 Israeli soldiers attacked, Tuesday, the naval procession in the northern parts of the Gaza Strip, by firing many live rounds, high-velocity gas bombs and rubber-coated steel bullets at the nonviolent protesters, wounding at least twenty Palestinians.

Dr. Ashraf al-Qedra, the spokesperson of the Health Ministry in Gaza, has confirmed that the soldiers injured twenty Palestinians, and caused many others to suffer the effects of teargas inhalation.

He added that the Palestinians, who were shot with live rounds, received the needed treatment before being moved to nearby hospitals, while the residents who suffered cuts and bruises, or the effects of teargas inhalation, received treatment in make-shift clinics.

Like previous weeks, hundreds of Palestinian protesters at shore areas in northern Gaza, while many boats sailed in territorial waters, to protest Israel’s ongoing siege on the coastal region.