Army Injures Two Palestinians, Abduct Three, In Nablus And One Near Bethlehem 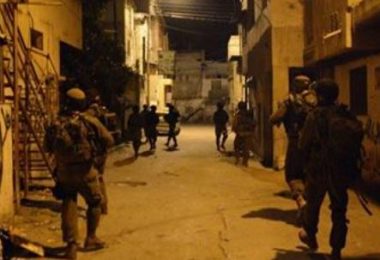 Israeli soldiers shot and injured, earlier Thursday, two Palestinian teenagers in the northern West Bank city of Nablus, during clashes that erupted after several army vehicles invaded it. The soldiers also abducted three Palestinians in Nablus, and one near Bethlehem.

Media sources said the Israeli army vehicles invaded several areas in Nablus, leading to clashes, mainly in al-Eman and Mo’ta Streets, in the city, in addition to ‘Askar refugee camp.

Medical sources in Nablus said one Palestinian, identified as Khaled Abdul-Qader Sharqawi, 17, was shot with a rubber-coated steel bullet in his neck, while Ahmad Jihad Abu Hashi, 19, was shot with a similar round in his head.

During the invasion, the soldiers broke into and violently searched many homes, and abducted three Palestinians identified as Husam Abu Ni’ma, from Askar refugee camp, Maher Taher Salah, from Mo’ta Street, and Wael Nael Bishtawi, from al-Eman Street.

Clashes also took place in the Deheishe refugee camp, south of Bethlehem, after dozens of soldiers invaded it.

In related news, the army installed several roadblocks at main junctions leading to al-Hajeriyya town, and al-Fawwar refugee camp, Wad al-Qomra, east of Doura town, in the southern West Bank district of Hebron, before stopping and searching dozens of cars, and investigated the ID cards of the passengers, while interrogating them.

Dozens of army vehicles were also deployed at junctions and roads leading to several villages and towns, south of Hebron city.