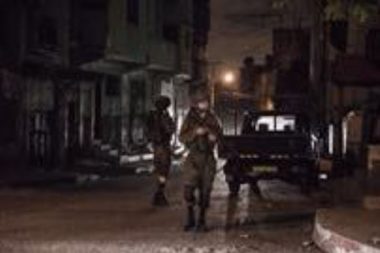 Many armored Israeli army vehicles invaded, on Thursday at dawn, the village of ‘Aboud, northwest of the central West Bank city of Ramallah, and clashed with many youngsters.

Media sources in Ramallah said the soldiers invaded the village from several directions, and fired many live rounds, rubber-coated steel bullets, gas bombs and concussion grenades, at youngsters who hurled stones and empty bottles on the invading vehicles.

Some of the gas bombs directly struck homes in the village, causing many Palestinians to suffer the effects of teargas inhalation.

The invasion was carried out after a young man, identified as Omar Natheer Barghouthi, 26, from ‘Aboud, was seriously injured by Israeli army fire, after the soldiers claimed he fired many live rounds from a speeding vehicle, targeting a military roadblock. Barghouthi was moved to a hospital in occupied Jerusalem.

On Wednesday evening, the soldiers killed a young Palestinian man, identified as Hussein Salem Abu Ghosh, 24, after he reportedly drove his car off the road and crashed into a bus station, close to “Adam” Israeli colony, where many soldiers and settlers were waiting.

The army also claimed that Abu Ghosh “carried a knife, but did not leave his car, and did not report any injuries among the soldiers or settlers.