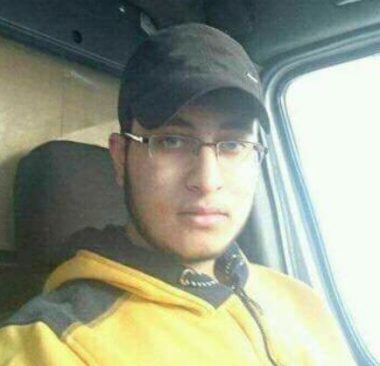 Israeli soldiers killed, on Wednesday evening, a young Palestinian man at a bus station close to an illegal colony, east of the central West Bank city of Ramallah, after he reportedly tried to ram soldiers with his car.

The army is claiming that the Palestinian, Hussein Salem Abu Ghosh, 24, drove his car off the road and crashed into the bus station, near “Adam” settlement, where many soldiers and settlers were waiting, and alleged that he “carried a knife, but did not leave the car.”

The army added that the incident did not lead to any casualties among the soldiers or the settlers.

Abu Ghosh, from Qalandia refugee camp, was shot multiple times and bled to death after the soldiers prevented Palestinian medics from approaching him; the army placed his corpse in a black bag, and loaded it in their jeep, before driving to Jerusalem.

The army stated it is investigating the incident as a suspected deliberate attack carried out by Abu Ghosh.

The soldiers installed many roadblocks, and searched dozens of cars, especially in Hizma, Jaba’, Atarot and roads leading to Qalandia refugee camp, north of occupied Jerusalem. It is worth mentioning that Hussein is the cousin of Hussein Mohammad Abu Ghosh, 17, who was killed a year ago on January 26, 2016, after he and Ibrahim Osama Allan, 23, stabbed a settler, identified as Shlomit Krigman, 24, who later died from her wounds at the Hadassah Israeli medical center, in Jerusalem. Another Israeli woman was seriously injured in the same incident.

Also on Wednesday evening, Palestinian medical sources said that a young man was injured after the soldiers shot him near ‘Aboud village, northwest of Ramallah.

The Israeli army claimed that the young man, who was driving a car, fired several bullets at a military base, near ‘Aboud, and that the soldiers fired back at him, causing serious wounds.