Army Injures Two Palestinians Near Ramallah, Abducts One Near Jenin 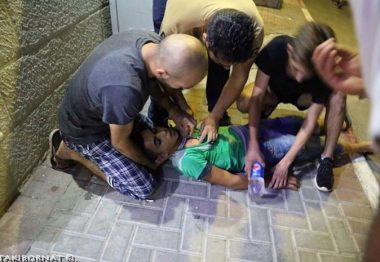 Israeli soldiers invaded, earlier Thursday, the village of Bil’in, west of the central West Bank city of Ramallah, and clashed with local youths, wounding two with rubber-coated steel bullets, and causing dozens of residents to suffer the severe effects of teargas inhalation. The soldiers also abducted a Palestinian man near Jenin.

Abdullah Abu Rahma, the media coordinator of the Popular Committee against the Annexation Wall and Colonies in Bil’in, said the soldiers fired many gas bombs, concussion grenades and rubber-coated steel bullets.

Abu Rahma added that the soldiers shot Mohammad Eyad Burnat, 15, with a rubber-coated steel bullet in his arm and abdomen, and Hamza Khatib, 18, with a similar round in his thigh; they were both moved to the Palestine Medical Complex, in Ramallah.

Many Palestinians suffered the severe effects of teargas inhalation, and received the needed treatment by local medics.

Furthermore, the soldiers invaded Marka village, southwest of Jenin, in the northern part of the West Bank, searched and ransacked homes, and abducted a father of three children, identified as Ahmad Ali Mousa, 38.

In addition, the soldiers invaded a store and a bakery in Doha town, west of Bethlehem, and confiscated many surveillance recordings.
The town has been subject to similar assaults, and illegal confiscations of surveillance tapes, over the last several days, during invasions and violent searches of stores and homes