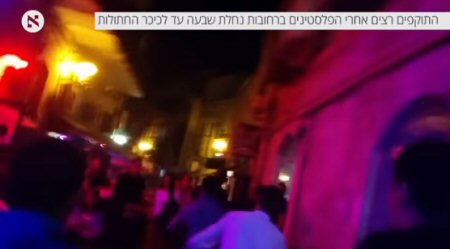 A video released on Thursday shows dozens of far-right Israelis attacking three Palestinians in Jerusalem a week ago, as Israeli police reportedly failed to respond and prevent the assault.

Israeli daily Haaretz obtained the video, according to Ma’an, where some 30 members of the Jewish extremist group Lehava are shown purpotedly assaulting three Palestinians during a march organized by the group in downtown Jerusalem last Thursday.

At one point in the shaky video, the Palestinians, who are reportedly all residents of occupied East Jerusalem, run into an Israeli police officer, who blocked the group of Israelis from approaching the Palestinians, and told the Jewish youths to leave. The youths refused and continued to hurl insults at the Palestinians.

The video then cuts to the Jewish youths chasing the Palestinians down a street in Jerusalem.

Haaretz reported that a witness said that the police officer eventually stopped trying to deter the assault, leaving the Palestinians to fend for themselves.

“The officer asked for our I.D. cards, but he didn’t help us or do anything, they continued to beat us right next to the cop. So we fled,” Majdi Abu Taya, 19, from the East Jerusalem neighborhood of Silwan told Haaretz.

Other witnesses told Haaretz that the police did not even attempt to prevent the assault, and refused to call in backup.

When the Palestinians fled the scene, the mob of Jewish youths followed them. Abu Taya was beaten by the Israelis when attempting to flee, according to Haaretz, while the two others were able to hide in a construction site and pelt rocks at the Jewish youths in an attempt to push them out of the area.

Haaretz also reported that while Israeli police had said they would open up an investigation into the incident, when a high school student who had witnessed the assault attempted to file a complaint, he was told that they had no record of such an incident occurring.

Another anonymous witness told Haaretz that it was not the first time he had seen Israeli extremists assaulting Palestinians, saying that “It’s systematic. They engage in provocations to get the victims to react, and then they’ll say it’s self-defense.”

According to the paper, one of the Palestinians was hospitalized with mild injuries from the incident.

An Israeli police spokesperson was not immediately available for comment.

It was added that, while most members of Lehava “merely hand out promotional material” during their marches, “others actively look for Palestinians and try to attack them.”

“Despite this, there have been almost no police investigations, much less indictments, on account of such mob attacks in recent years.”

Meanwhile, Palestinian residents of East Jerusalem routinely report mistreatment by Israeli police themselves, while Palestinians have often accused Israeli forces of detaining Palestinian youths without any evidence of wrongdoing and assaulting them in the process.

In May, a video emerged of Israeli police forces detaining a family of Palestinian street vendors after assaulting them in East Jerusalem.

In another incident In March, an Israeli police officer was caught on camera headbutting, slapping, punching, kicking, and kneeing a Palestinian in the lower abdomen in the East Jerusalem neighborhood of Wadi Joz.

Israeli police spokeswoman Luba al-Samri claimed at the time that the video showed “dangerous and unordinary individual behavior” that did not reflect the usual conduct of Israeli police forces.

However, Palestinians have long claimed that Israeli forces abuse their position of power to verbally and physically humiliate and assault Palestinians on a regular basis.

Rights groups have also warned that the failure of the Israeli police and army to adequately respond to Israeli violence on Palestinians emboldens Jewish extremists to openly assault or attack Palestinian residents in the presence of Israeli forces in both the occupied West Bank and East Jerusalem.