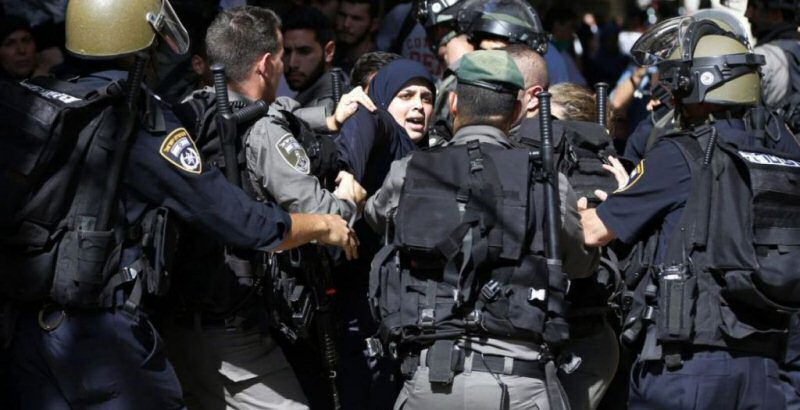 Palestinian women detainees in Damon prison are being subject to harsh sanctions, deprived of family visits and thrown in solitary confinement, reported prisoners and advocates. They are also being denied access to the “canteen” (prison store) and subjected to financial fines.

Taghreed Jahshan, lawyer with the Women’s Organization for Political Prisoners, visited the women and reported that they have been subject to sanctions for one week, since 22 June, amid a media blackout.

One of the most prominent detainees held under solitary confinement is Shireen Issawi, 39, a Palestinian lawyer serving a prison term of four years, accused of helping her client’s families support them financially in prison. She is also the sister of long-term hunger striker and re-arrested Palestinian releasee, Samer Issawi, and was the public spokesperson for his campaign during his strike. Dalal Abu Hawa, 39, serving a 1-year prison sentence, is also being held in solitary confinement. Both were transferred from Damon prison to the Jalameh/Ketziot interrogation center, reportedly due to the lack of isolation rooms in Damon prison.

In addition, Haifa Abu Sbeih, former prisoner, reported that Sabah Faraoun, whose administrative detention – imprisonment without charge or trial – was just extended for another four months, is also being held in solitary confinement. Abu Sbeih told Wattan TV that the detainees were acing a number of sanctions, including fines and denial of family visits. Some detainees were fined 700, 500 and 200 shekels while others had electronic items confiscated. She noted that Ansam Shawahneh, 20, has been denied all family visits for over four months and will now face even longer periods of time.

Shawahneh faced a military court on 20 June; she is accused of attempting to stab an Israeli occupation soldier. On 20 June, she was told in court that she would be sentenced to four to five years in prison, pending approval by the soldier in question. Her family members, speaking to Asra Media, raised extreme objection to the terms of the sentencing and the individual role of soldiers in determining the sentence of Palestinian political prisoners.

Ataya Abu Aisha, 29, is the representative of the women detainees in Damon after Abu Sbeih was released. She is one of the detainees subjected to the harsh sanctions inside the prison. The repression has targeted the Palestinian women detainees following prisoners’ protests over denials of their rights within the prison.

There are 23 women detainees in Damon prison out of 56 women Palestinian prisoners; most are held in either Damon or HaSharon prisons.

Zeinab Ankoush, the mother of Adel Ankoush, 19, who was shot dead by Israeli occupation forces in Jerusalem along with Bara’a Saleh Atta and Osama Atta after they carried out a stabbing attack targeting armed occupation forces, has been imprisoned for one week since she was seized from the family home in Deir Abu Mashaal near Ramallah. She will be brought before the Ofer military court today, 29 June, where she is accused of “incitement” for speaking about the death of her child. Meanwhile, her husband – Adel’s father, Hassan Ankoush, was seized by Israeli occupation forces in a series of pre-dawn raids on Thursday, 29 June, as the forces also invaded Osama Atta’s family home, ransacking its contents.