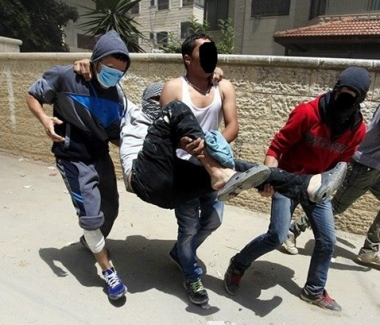 Israeli soldiers shot and injured, on Friday evening, two Palestinians with live fire, including one who suffered a serious injury, during clashes that took place after the army invaded the ar-Ram town, north of occupied Jerusalem.

Medics rushed the two Palestinians to Palestine Medical Complex, in Ramallah; one of them suffered a serious injury after the soldiers shot him in the pelvis, while the other was shot in the leg.

The clashes took place after the soldiers invaded the town, and used excessive force against Palestinians marching in condemnation to the ongoing Israeli violations against Al-Aqsa Mosque, in occupied Jerusalem.

The invasion led to clashes; the soldiers fired many live rounds, rubber-coated steel bullets and gas bombs, while several youngsters hurled stones at the military vehicles.