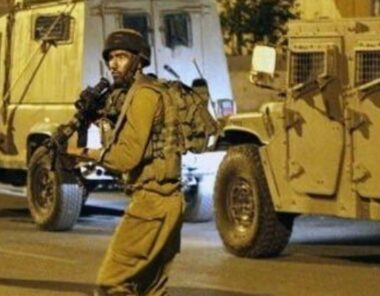 Dozens of Israeli soldiers invaded, on Sunday at night, Sielet al-Harthiya town, west of the northern West Bank city of Jenin, took measurements of four Palestinian homes in preparation for demolishing them.

They added that several Israeli army sharpshooters took positions on the rooftop of the house before Palestinian resistance fighters exchange fire with the invading forces.

The Israeli army claims that Ahmad’s sons, Omar, and Gheith, along with their uncle Mohammad and three other Palestinians, are responsible for the shooting that led to the death of a colonialist settler, identified as Yehuda Dimantman, 20, on December 16th, 2021.

Omar and Gheith, along with their uncle, Mohammad, were abducted earlier on Sunday at dawn when the soldiers invaded their homes and ransacked them.

In addition, the soldiers also invaded the home of Mohammad Gheith and took measurements of the property in preparation for demolishing it.

The soldiers also invaded the homes of two political prisoners, identified as Ibrahim Mousa Tahaina and Mahmoud Ghaleb Jaradat, and also took measurements of the properties in preparation for demolishing them.

The four homes provide shelter for 30 Palestinians, including children and seniors.

Israel’s policy of home demolitions is an illegal act of collective punishment that violates International Law and various international resolutions and treaties.

Israel also does not demolish the homes of Israelis, especially colonialist settlers, who are responsible for killing or seriously wounding Palestinians in the occupied territories.

It is worth mentioning that Israeli soldiers killed four Palestinians, including a child, in the occupied West Bank since the beginning of this month.