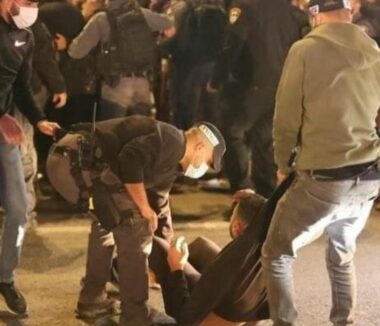 Israeli soldiers invaded, on Wednesday evening, the al-‘Isawiya town and the at-Tour neighborhood, in occupied Jerusalem, and attacked Palestinian protesters.

Eyewitnesses said the soldiers invaded the al-Isawiya town, and attacked local Palestinians in a protest tent that was installed on the ruins of the Oleyyan family home, which was demolished by the army two days ago.

They added that the soldiers fired gas bombs and concussion grenades at the protesters, while several youngsters hurled stones at the army jeeps.

On Thursday at dawn, the soldiers abducted at least eleven Palestinians from their homes in several parts of the occupied West Bank, the Palestinian Prisoners’ Society (PPS) has reported.