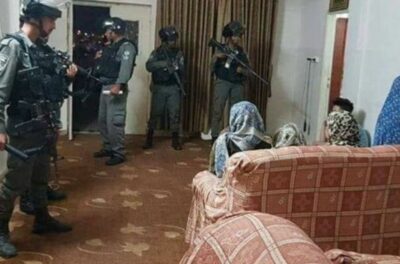 WAFA News: GENEVA, Thursday, February 25, 2021 (WAFA) – “It happens nearly every night. Without warning, without a search warrant, without a court order. While you are sleeping peacefully, a Palestinian family is woken up abruptly.

“Their children are gathered in a room, afraid, trying to understand why they were suddenly yanked out of bed by masked soldiers who are now standing in the middle of their living room, photographing them, opening their drawers, speaking to them in broken Arabic.

“When the soldiers leave the house, they leave behind much more than a mess in the living room. The Palestinian family is left with trauma: with fear of what the next night will bring, children who wet their beds, and a feeling of being unsafe in their own home, of a loss of control. Every such invasion shatters the most basic premise of being a parent – the knowledge that they can protect their children.”

With these words, three Israeli NGOs start the narration of their new report: A Life Exposed: Military invasions of Palestinian homes in the West Bank.

This report is the product of a joint project launched by Yesh Din, Physicians for Human Rights Israel (PHRI), and Breaking the Silence in 2018. It presents the practice of raiding Palestinian homes in the West Bank (excluding East Jerusalem) and its impacts.

Palestinians living under occupation in the West Bank, however, are constantly vulnerable to the arbitrary invasion of their homes by Israeli security forces and the severe, resulting harm, said the three organizations.

Invasions by the Israeli military into Palestinian homes in the West Bank are an inseparable part of life under the occupation and the system of control over the Palestinian population. Among the variety of practices that characterize Israel’s military control over the West Bank, the harm caused by home invasions is particularly severe as it robs individuals, families and communities of the fundamental certainty that their home is their castle.

“Our report unquestionably shows: invasions by the Israeli military into Palestinian homes are an inseparable part of life under Israeli occupation and the system of control over Palestinians that it entails,” wrote the three organizations.

According to the United Nations Office for the Coordination of Humanitarian Affairs (OCHA) Israeli security forces invaded homes belonging to Palestinian families 6,402 times in 2017-2018. This happens routinely, and without a judge’s order, without an entry order, without a search or arrest warrant, often completely arbitrarily and without any suspicion towards the occupants of the house.

Israel does not limit invasion into Palestinian homes to exceptional cases in which there are concrete suspicions against an individual and invading their home is critical to averting the threat they pose.

Military law in the West Bank does not require a judicial warrant confirming the necessity of the intrusion in order to invade the private domain. As such, it leaves Palestinians constantly vulnerable to arbitrary invasions into their homes.

Almost every night, armed Israeli soldiers raid homes, wake women, men and children, and carry out different actions inside the homes of Palestinian residents. According to UN figures, these invasions occur more than 200 times each month. Beyond the harm suffered by individuals and families as a result of the intrusion into their homes, this practice effectively serves as a means to oppress and intimidate the Palestinian population and increase control over it, said the Israeli organizations.