Army Invades Home Of A Former Political Prisoner, Confiscate His Car, near Hebron 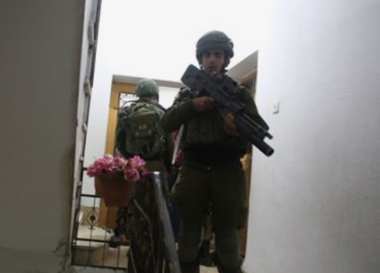 Israeli soldiers invaded, earlier Tuesday, Beit Ummar town, North of the southern West Bank city of Hebron, broke into the home of a former political prisoner and confiscated his car.

The soldiers stormed the home of Mohammad Ahmad  ‘Aadi, 60, before violently searching and ransacking the property, causing damage.

The family said the soldiers interrogated them, and illegally confiscated his car, without providing any reason.

It is worth mentioning that Mohammad was previously imprisoned by Israel for 10 years.

On Monday evening, the soldiers invaded the al-‘Isawiya town, in occupied Jerusalem, and abducted a child, identified as Mohammad Ahmad Atiya, 15.