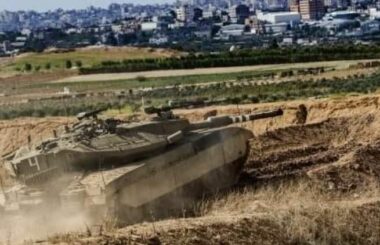 Media sources said the invasion was carried out by three tanks and three armored military bulldozers, who came from Abu Safiya base, across the fence, east of Jabalia.

They added that the army advanced dozens of meters into the Palestinian agricultural lands, and started bulldozing them, in addition to installing the sand hills close to the fence.

During the invasion, the army fired many smoke bombs, and sporadic rounds of live ammunition at random, to prevent the Palestinian farmers from entering their lands.

Furthermore, Israeli military drones were deployed over the eastern areas of Jabalia town, and Gaza city.

It is worth mentioning that the army frequently invades and uproots Palestinian lands near the perimeter fence across the eastern parts of the Gaza Strip, in addition to attacking farmers, workers, and fishermen in Gaza territorial waters.