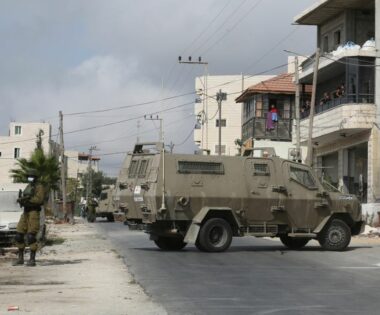 Israeli soldiers invaded and violently searched many homes, and installed roadblocks, on Monday morning, in the southern West Bank governorate of Hebron.

Owners of two of the invaded homes have been identified as Ya’coub Abu Turki and Mohammad Abu Turki.

The soldiers also installed roadblocks at Hebron’s northern roads, in addition to the main entrances of Sa’ir, Halhoul, and Yatta towns, before searching dozens of cars and examining the ID cards of the Palestinians.

In related news, the soldiers abducted nine Palestinians, including three children, from the West Bank governorates of Ramallah, Bethlehem, Jenin, and Nablus, after the army invaded and ransacked many homes, the Palestinian Prisoners’ Society (PPS) has reported.