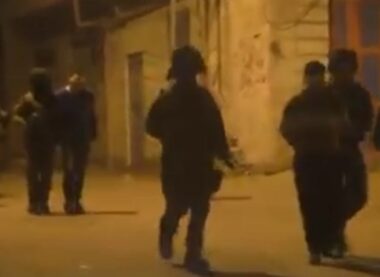 Israeli soldiers invaded, on Monday at dawn, the ar-Ram town, north of the occupied Palestinian capital, Jerusalem, and abducted three Palestinians, including a wounded teen.

Eyewitnesses said the soldiers, accompanied by military dogs, stormed and searched several homes in the town, causing excessive damage, and interrogated many Palestinians before abducting three.

It is worth mentioning that Wisam is still suffering the aftermath of a previous injury he sustained to his eye with the soldiers shot him with a rubber-coated steel bullet.

In related news, the soldiers abducted nine Palestinians, including three children, from the West Bank governorates of Ramallah, Bethlehem, Jenin, and Nablus, after the army invaded and ransacked many homes, the Palestinian Prisoners’ Society (PPS) has reported.

In addition, the soldiers invaded and violently searched homes, and installed roadblocks, in the southern West Bank governorate of Hebron.