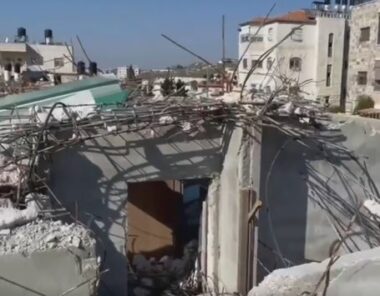 On Sunday and Monday, Israeli soldiers forced Palestinian families from the occupied capital, Jerusalem, to demolish their homes and sheds, under the pretext of being built without permits.

The Wadi Hilweh Information Center in Silwan (Silwanic) has reported that the Israeli authorities issued, over the past few days, many demolition orders targeting homes and structures, owned by members of the families of Awadallah, Siyam and Nimir.

Silwanic added that the families had to demolish their owned properties to avoid the excessively high fines and fees that they would pay in addition to the demolition costs if the city council carried the demolitions out using its own workers and vehicles.

Resident Jihad Awadallah said that his family had to demolish its two-story home, which was built twenty years ago, in Shu’fat town, northeast of Jerusalem.

Jihad added that his family tried to obtain all needed permits, and already paid high costs and fees; however, the city instead issued another 120.000 Shekels fine.

Jihad also said that the property was 120 square/meters, adding that his brother lived in one floor of the building, but now the family had to rent an apartment to shelter themselves.

In addition, the army forced Nimir Nimer to demolish his son’s 90 square/feet flat in Sur Baher, southeast of Jerusalem.

Nimir said the flat was built five years ago, adding that the family was still finalizing its construction due to financial issues, but the City Council decided to level it and informed the family that they have to destroy their property or face the high fines and fees.

Furthermore, resident Omar Siyam was forced to demolish a barn he owns in Silwan town, south of the Al-Aqsa Mosque in Jerusalem.