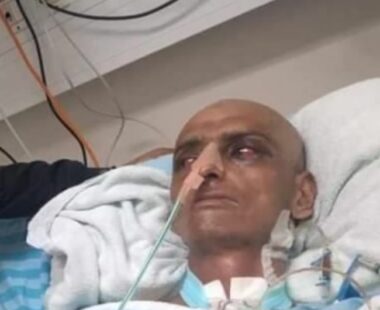 Update: The Palestinian Detainees’ Committee has reported that Israel released an ailing detainee who was diagnosed with cancer after he spent 19 years of his 20-year prison term.

The released detainee, Hussein Masalma, was instantly moved to Soroka Israeli medical center due to the seriousness of his condition.

He might be later moved to a Palestinian hospital in the West Bank.

The Palestinian Prisoners’ Society (PPS) has reported that the Israeli authorities have officially approved the release of a detainee who was recently diagnosed with cancer, after he spent 19 years of his 20-year prison term. The PPS said the detainee Hussein Masalma, from Bethlehem, south of occupied Jerusalem in the West Bank, will either be sent back to his family to receive treatment at a Palestinian hospital, or continue treatment at an Israeli hospital, depending on his condition.

It added that Masalma constantly complained of bad health and pain, but the Israeli authorities deprived him of the needed medical attention and checkups until he was eventually moved to an Israeli hospital in January, where he was diagnosed with an advanced stage of Leukemia. It is worth mentioning that Masalma was abducted by the soldiers in the year 2002, and was sentenced to 20 years in prison.

In January of this year, the Israeli authorities denied an appeal for his release before the central court validated the decision despite his critical health condition.