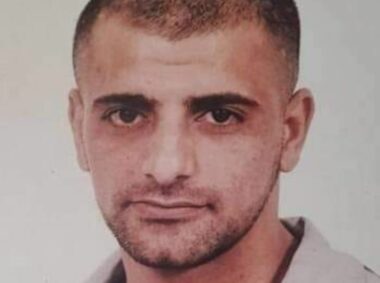 The Palestinian Detainees Committee has warned, Wednesday, that a cancer-stricken political prisoner held by Israel is currently in a life-threatening condition at the Soroka Israel medical center.

The Committee said the detainee, Hussein Masalma, 37, from Bethlehem, south of occupied Jerusalem, is at the intensive care unit of the hospital and added that he recently started suffering from a sharp pain in the abdomen but did not receive professional medical treatment.

It said that the detainee was only recently the detainee was moved to the hospital, and was officially diagnosed with Leukemia, and stated that his conditions started rapidly deteriorating a week ago.

It is worth mentioning that Masalma was taken prisoner in the year 2002, and was sentenced to twenty years in prison.

The Committee slammed Israel’s continued abuse of the detainees, and its elaborate policies of depriving them of the urgently needed professional medical attention, in addition to the alarmingly increasing number of detainees who have contracted the coronavirus.

“The detainees’ lives are in real danger, not only they are facing these difficult living conditions and constant violations, but also face deliberate medical neglect,” it said, “There is now a serious concern about the detainees who have weak immune systems, including cancer patient.”

It called on the International Community, various regional and international human rights, and legal groups, to intervene and pressure Israel into releasing the ailing detainees, especially cancer patients, and those with other medical conditions.