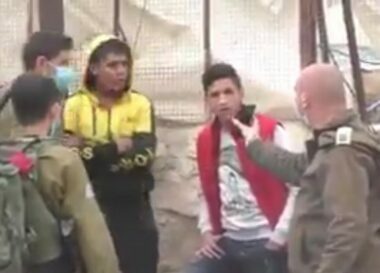 Local sources said the soldiers attacked several Palestinians while trying to force them away, and abducted the two teens.

They added that the soldiers abducted Mos’ab Natsha, 17, and Saed Seder, 17, before moving them to an interrogation facility in the city.

On Wednesday at dawn, the soldiers abducted fourteen Palestinians from several parts of the occupied West Bank, after the army stormed and ransacked many homes.

In related news, a group of fanatic Israeli colonists, squatting on private Palestinian lands near Nablus, in northern West Bank, invaded large areas of farmlands and started plowing them, before assaulting the Palestinians and injuring a father and his son.