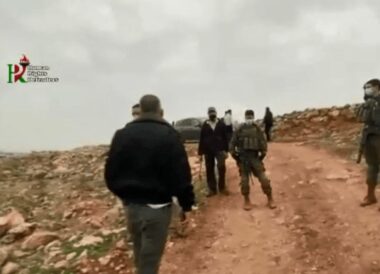 Despite an official decision from the Israeli Police and the “Civil Administration Office,” several illegal Israeli colonialist settlers tried to occupy and annex a Palestinian land in the al-Baq’a area, east of Hebron city, in the southern part of the occupied West Bank.

The land is owned by Aref Jaber, a volunteer with “Human Rights Defenders,” who said that he managed to obtain an order from an Israeli court banning the colonists from entering his land and building a room.

Jaber added that the order, issued about a week ago, also instructs the colonists to remove everything they brought to the outpost.

“However, today they returned and tried to annex the land again,” he said, “I, along with several volunteers, intercepted them and managed to remove them, for now.”