Israeli Colonists Invade Palestinian Lands, Plow Them, and Injure A Father And His Son 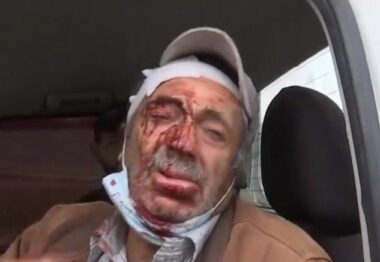 A group of fanatic Israeli colonists, squatting on private Palestinian lands near Nablus, in northern West Bank, invaded large areas of farmlands and started plowing them, in addition to assaulting the Palestinians and injuring a father and his son.

The fanatic colonists invaded Palestinian lands in Khirbat at-Twayyil area, east of Nablus, and started plowing them in an attempt to annex the lands and plant them.

Locals in the village rushed to their lands and tried to stop the colonists, while some residents brought agricultural tractors and started plowing their own lands, while the fanatic colonists continued to attack their lands, and physically assaulted the residents. Eyewitnesses said Israeli soldiers were present in the area even before the attack took place, and did not even attempt to stop the colonists, who injured a father and his son in the head.

They added that the soldiers only intervened when many Palestinians rushed to the area to protect their lands, and stated that at least one soldier also participated in assaulting the Palestinians.

“While we own these lands, the lands of our ancestors, those colonists, who came from several parts of the world as invaders and attackers, now they want to force us out of our lands to occupy them and build illegal outposts,” the injured father said.

There are more than 1500 Dunams of private Palestinian lands in the attacked area, and are surrounded by illegal colonialist outposts in addition to a number of Israeli military bases.

Ayman Bani Fadel, the former mayor of Aqraba village, and an owner of one of the attacked lands, said the residents have official deeds dating back to their ancestors, proving ownership of their lands. It is worth mentioning that, in the year 1982, colonialist groups occupied the lands, and tried to build an outpost, but the residents filed appeals with Israeli courts and presented the official deeds, proving their ownership of the lands, and the construction was halted.

The villagers said that they will never abandon their lands, the lands of their ancestors, and will remain steadfast to protect their livelihoods despite the constant assaults by the colonists and the soldiers.

It is worth mentioning that the attacked lands are owned by many Palestinians from several surrounding villages and towns in Nablus.