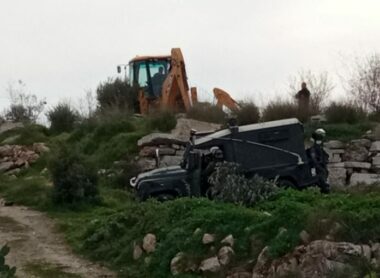 Media activist Mohammad Awad said the Israeli military bulldozers uprooted more than eighty olive and almond trees in the al-Qarn area, in the eastern part of the town.

He stated that the Palestinian has been in constant legal battles in Israeli courts, attempting to save his property, and recently obtained a permit from the Israeli Supreme Court allowing him to plant and tend to his land.

The Palestinian has all the deeds proving ownership of his lands; however, Israel has been trying to uproot and confiscate them for its illegal colonialist activities.

The lands are also about a kilometer away from the main Hebron-Jerusalem road, and three kilometers from the bypass road, used by the illegal colonialist settlers.

In related news, a group of fanatic Israeli colonists, squatting on private Palestinian lands near Nablus, in northern West Bank, invaded large areas of farmlands and started plowing them, in addition to assaulting the Palestinians and injuring a father and his son.