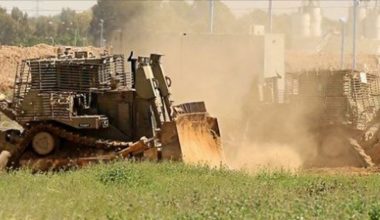 The invasion was carried out by a few armored vehicles, and bulldozers, before the soldiers advanced approximately 50 meters into Palestinian lands in the Sanati area, east of Khan Younis.

The soldiers then bulldozed Palestinian lands, and installed sand hills in the area, before withdrawing.

In related news, Israeli navy ships fired several live rounds at Palestinian fishing boats, in northern Gaza, causing no damage or injuries, but forced the fishermen back to shore.

The Israeli army frequently invades and bulldozes Palestinian lands in areas close to the “border fence,” under security allegations, in order to force the Palestinians away, and prevent them from using their lands.