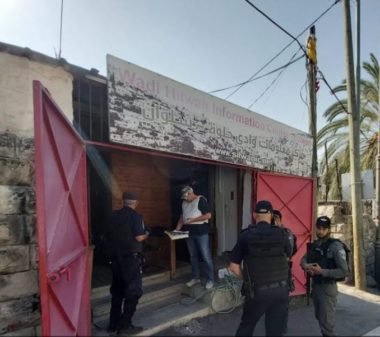 Dozens of Israeli soldiers invaded, Wednesday, Silwan town, south of the Al-Aqsa Mosque in occupied East Jerusalem, before storming the Wadi Hilweh Information Center in Silwan (Silwanic) and summoned its director for interrogation.

Jawad Siyam, the director of Silwanic and a senior nonviolent activist in Silwan, said the soldiers and police officers stormed the center, and summoned him for interrogation, which will be held next Tuesday.

Siyam added that the police is alleging that he installed a wooden shed without obtaining a permit from the City Council, although the structure was built in 2009.

He also said that the invasion into the media center is part of Israel’s violations against Palestinian media outlets, especially since Silwanic exposes the ongoing Israeli violations against the Palestinians, their homes and properties, not only in Silwan, but in all areas of occupied Jerusalem.

It is worth mentioning that the invasion is not the first of its kind against Silwanic, as the soldiers and police officers repeatedly stormed the media center and conducted violent searches.

In related news, the soldiers abducted Fayez Mahmoud from his home in the al-‘Isawiya town, in Jerusalem.