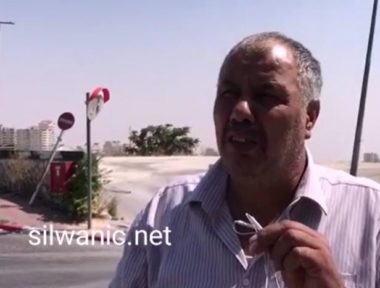 An Israeli court in occupied East Jerusalem has ordered a senior Palestinian nonviolent media activist out of his town, al-‘Isawiya, northeast of the city, until September 15th, in addition to forcing him to pay a fine of 1000 Shekels, and third-party guarantee of 10000 Shekels.

The Wadi Hilweh Information Center in Silwan (Silwanic) has reported that Mohammad Abu al-Hummus, a member of the Follow-Up Committee in al-‘Isawiya, was taken prisoner from his home, last Sunday, after the soldiers invaded and searched his property.

Last Sunday, an Israeli court ordered the release of Abu al-Hummus, in addition to forcing him out of his town for one week; however, the prosecutor’s office filed an appeal against the ruling, demanding that he must be removed from his town for a longer period.

On Tuesday, the District Court in occupied Jerusalem held a hearing, and decided to force Abu al-Hummus out of his town until September 15th, in addition to restricting his activities, especially his media work.

Speaking to Wadi Hilweh Information Center in Silwan (Silwanic), Abu al-Hummus said that he was taken prisoner, Sunday, for filming the soldiers and documenting their constant invasions and violations in his town.

He added that his abduction, and the conditions of his release, are meant to prevent him from talking to the media, especially his interviews with Israeli media outlets, and his constant documentation of the ongoing invasions and violations.

“This apparently provoked them; I never violate the law, and I only perform my duties,” he said, “They have unjust laws targeting the Palestinians in occupied Jerusalem and preventing them from documenting and exposing these violations.”

“Now am standing here, just meters away from my town, from my home, and I cannot go there because of these unjust and unfair laws.”

“This is how the illegal Israeli occupation runs; they shower us with gas bombs and concussion grenades,” he added, “Israel is carrying out serious incitement against us, against our very presence in occupied Jerusalem – they are trying to silence the media, the locals, and are meddling even in weddings held in the town, and in Jerusalem in general.”

“We will remain steadfast; we will stay here in our town despite their serious violations, including home demolitions and constant invasions,” he concluded, “We must remain united in Jerusalem, in al-‘Isawiya, and will continue to counter Israel’s ongoing assaults and violations.”