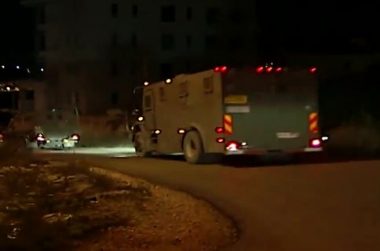 Dozens of Israeli soldiers invaded, on Friday at dawn, the towns of Beit Rima, Kafr Ein, and Birzeit, north and northeast of the Ramallah and al-Biereh District, in central West Bank, and searched homes.

Eyewitnesses said the soldiers drove around in the streets and alleys of the three communities, while many foot soldiers marched in neighborhoods, before breaking into several homes, and searched them.

The soldiers also interrogated several Palestinians, while inspecting their ID cards, and withdrew later without conducting any arrests.

Also at dawn, several Israeli military vehicles invaded the villages of az-Sawiya and Qaryout, south of Nablus, in the northern part of the occupied West Bank.