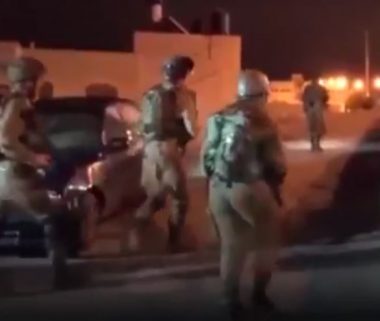 Israeli soldiers closed, on Sunday at dawn, the main gate leading to eleven villages and towns, after briefly opening it, and prevented all Palestinians under the age of thirty from entering or leaving them.

More than sixteen villages and towns have been under strict Israeli siege for the sixth consecutive day, an issue that poses real risks on the Palestinians who became isolated from their surrounding communities, and have been unable to receive basic food supplies, except for what they already have at hand.

It is worth mentioning that the soldiers briefly removed the military roadblock, close to the Tunnel Road, leading to the villages and towns, but soon closed it, stopped and searched all cars and inspected the ID cards of the passengers.

The soldiers then denied all Palestinians, 35 years of age or younger, from entering or leaving their villages and towns.

Israeli army bulldozers also destroyed roads linking between the Palestinian villages and towns in the area, and kept the tunnel road, near Biddu town, under tight siege, turning the inhabitants of eleven communities into prisoners in their own towns.

Israel initiated this collective punishment measure on September 26, after the fatal shooting, which was carried out by Nimir Mahmoud Jamal, 37, targeting a group of Israeli Border Police officers, and armed security guards, killing three and wounding a fourth, at the main entrance of Har Hadar illegal Israeli colony.

Nimir was then shot and killed by the remaining Israeli border guards at the entrance of the settlement colony.

Har Hadar was illegally built on lands owned by Palestinians from Biddu, Beit Surik and Qotna.