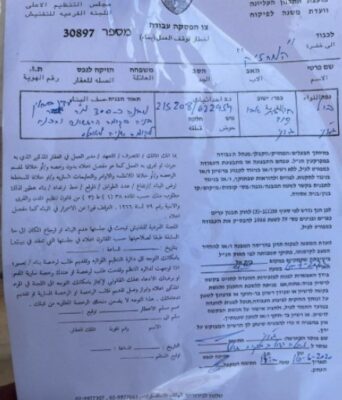 On Thursday, Israeli soldiers invaded the Jabal Abu Sood area in the Al-Khader town, south of Bethlehem in the occupied West Bank, and handed the Palestinians orders to halt the construction of twelve homes.

Hasan Breijiyya, the head of the Bethlehem office of the Wall & Colonization Resistance Commission, said several army jeeps invaded the town and handed the orders to twelve Palestinians.

Breijiyya added that the orders are not only for halting the construction of the Palestinian homes but also for demolishing those under-construction homes.

Al-Khader is subject to constant Israeli violations, including invasions, demolishing homes and property, and uprooting the town’s lands.

Numerous Palestinian homeowners have faced the demolition of their homes, barns, and other buildings by the Israeli military and the forced takeover of their land as part of the effort to displace the indigenous Palestinian population to allow for Israeli colonization.