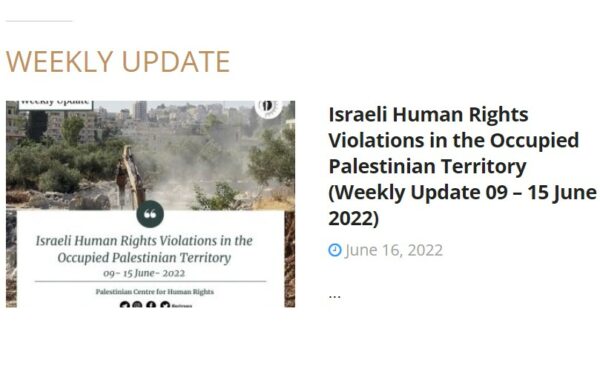 A Palestinian was killed and another succumbed to previous wounds while 19 others, including 7 children, were injured by Israeli Occupation Forces (IOF)’s fire and assaults.  Also, dozens of others suffocated and sustained bruises in IOF attacks in the West Bank, including occupied East Jerusalem. Details are as follows:

On 09 June 2022, Mahmoud Abu ‘Ayhour (27) was killed and two others were wounded by IOF’s fire during the latter’s incursion into Halhoul in Hebron. More information is available here.

On 11 June 2022, Samih ‘Amarna (35) died in al-Istishari Hospital in Ramallah, succumbing to wounds he sustained in the neck by IOF fire on 01 June 2022 during IOF’s incursion into Ya’bad village in Jenin and blowing up the family house of Diaa Hamarshah, who carried out a shooting attack in Tel Aviv months ago.

Meanwhile, those injured were victims of IOF excessive use of force and suppression of peaceful protests organized by Palestinian civilians and they were as follows:

On 09 June 2022, Palestinian sustained bruises after Israeli Guards at the entrance to “Petza’el” settlement between Fasayil and Jiftlik village, northern Jericho severely beat him, noting that he was on his way to work.

On 10 June 2022, 7 Palestinians, including 4 children, were wounded in clashes after IOF suppressed Kafr Qaddoum weekly peaceful protest in Qalqilya.  On the same day, a Palestinian was injured with a bullet during clashes with IOF on al-Shalalah Street in central Hebron.  Two brothers, including a child, were wounded by IOF’s fire and teargas canisters at the entrance to al-Nabi Saleh village, northwestern Ramallah.

On 11 June 2022, a child was wounded in the right knee when IOF opened fire in clashes at the entrance to al-‘Aroub refugee camp in Hebron.

On the same day, a Palestinian sustained a serious wound after he was beaten with riffles’ butts on his head, causing him a cerebral laceration, while others suffocated during IOF’s protection of a group of settlers who conducted assaults and provocations against Palestinians gathered in their lands threatened with confiscation in Tarqumiyah village, Hebron.

In the afternoon, a Palestinian was hit with a sound bomb in his arm during IOF’s incursion into Beit Hanina village in East Jerusalem, where IOF raided shops and arrested, searched, and assaulted Palestinians.

On 12 June 2022, a Palestinian sustained a critical injury after an IOF’s military SUV ran over him during their incursion via the eastern entrance to Husan village, western Bethlehem.

On 13 June 2022, a child sustained a rubber bullet injury in his leg by IOF’s fire near the entrance to al-Jalazone refugee camp, northern al-Bireh.  In the evening, 3 Palestinians were injured with shrapnel of teargas canisters and 2 others were arrested after being beaten by IOF in clashes with the latter in Silwan in East Jerusalem following clashes with settlers.

”So far in 2022, IOF attacks killed 57 Palestinians, including 46 civilians: 13 children, 5 women (one was journalist Sherin Abu ‘Akleh) and the rest were activists; 3 of them were assassinated. Also, 871 others were wounded in these attacks, including 95 children, 4 women, and 19 journalists all in the West Bank, except 12 fishermen in the Gaza Strip.

IOF demolished 3 houses, displacing a family of 4 individuals, including 2 children, and a facility.  They also razed 4 dunums and handed 4 demolition and cease-construction notices as well as confiscating a touring caravan. Details are as follows:

On 09 June 2022, IOF demolished a house of 4 under-construction apartments in Beit Jala, western Bethlehem, under the pretext of unlicensed construction.

On 12 June 2022, IOF leveled 4 agricultural dunums and uprooted 95 olive trees adjacent to “Hitmar” settlement in al-Khader village, Bethlehem.  IOF also handed a cease-construction notice to a house in Abu al-‘Asja village, western Hebron, under the pretext of building in Area C without a prior permit.

On 15 June 2022, IOF demolished a 50-sqm house in Sur Baher village, occupied East Jerusalem, under the pretext of unlicensed construction, displacing a Palestinian, his wife, and two children.  IOF also demolished a commercial facility and a room in the al-Khalaylah neighborhood in al-Jeeb village, East Jerusalem.

”Since the beginning of 2022, Israeli occupation forces made 77 families homeless, a total of 445 persons, including 90 women and 210 children. This was the outcome of IOF demolition of 76 houses and 16 residential tents. IOF also demolished 48 other civilian objects, leveled vacant areas of land and delivered dozens of notices of demolition, cease-construction, and evacuation.

On 09 June 2022, setters severely beat up a farmer in the latter’s land and another civilian in his house in Kisan village, eastern Bethlehem.

”So far this year, settlers carried out 149 attacks on Palestinians and their properties in the West Bank.

IOF carried out 220 incursions into the West Bank, including occupied East Jerusalem. Those incursions included raids and searches of civilian houses and facilities and the establishment of checkpoints.

During those incursions, 57 Palestinians, including 2 children and a woman, were arrested as on 09 June the highest number of arrests were reported (24 persons) during 37 incursions across the West Bank, including Jerusalem.

Meanwhile, the Israeli occupation maintains its illegal and inhuman 15-year closure on the Gaza Strip. Details are available in PCHR’s monthly report on the Gaza crossings. No major change has occurred on the state of crossings for a month.

In the West Bank, including occupied East Jerusalem, IOF continues to impose restrictions on the freedom of movement. On top of its 108 permanent checkpoints, IOF established 102 temporary military checkpoints and arrested 2 Palestinians at those checkpoints.

”So far in 2022, IOF established 1926 temporary military checkpoints and arrested 106 Palestinians at those checkpoints