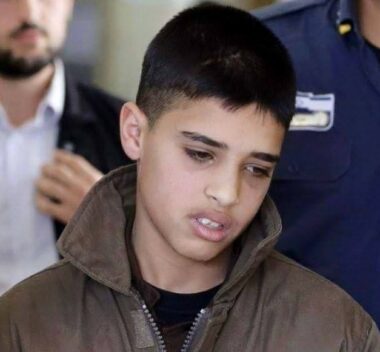 The Palestinian Centre for Human Rights (PCHR) follows up with deep concern the health condition of prisoner Ahmad Manarsa (21), who has been arrested in “Eshel Prison” in Beersheba and sentenced to 12 years in prison, after referring him on Monday evening, 13 June 2022 to al-Ramla Prison Hospital due to his deteriorating health and mental condition.

According to information available at PCHR, Manasra’s mental health condition worsened due to being placed in solitary confinement in “Eshel Prison. Consequently, he was taken to al-Ramla Prison Hospital, where the prison doctor decided to admit him to the hospital for 10 days.

It is worth noting that, the Israeli Occupation Forces (IOF), arrested Mansara at the age of 13, after opening fire at him, and his cousin Hasan Khaled Manasra (15) on 12 October 2015, under the pretext that they tried to stab two Israelis in occupied East Jerusalem.

As a result, Manasra was seriously injured while his cousin was killed. Manasra was subject to arrest and torture despite his serious injury.

A Leaked footage from an Israeli investigation center that went viral showed Manasra being subject to mental and physical torture by the investigators.

On 07 November 2016, he was sentenced to 12 years in prison, in violation of the rules of international humanitarian law and international human rights law, especially the United Nations Convention on the Rights of the Child (UNCRC).

On 12 April 2022, the Israeli District Court in Beersheba, issued a ruling in terms of the appeal submitted by Manasra to annul the parole committee’s decision that considered his file as a case of “terrorism”, and to return the file to the committee to reconsider it and discuss his early release.

Manasra’s case highlights IOF’s policy of torture and cruel treatment against Palestinian prisoners, particularly children, during their arrest and the issuance of unfair sentences against them that may amount to life imprisonment. According to PCHR’s statistics, the number of Palestinian prisoners in Israeli jails is 4700, including 170 children.

PCHR expresses its concern over the life of prisoner Manasra, and: