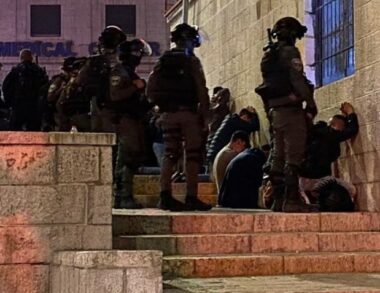 In Qalqilia, in the northern West Bank, the soldiers invaded Habla town, south of the city, and abducted Tamer Kifah Shahwan, 24, after storming his home and ransacking it.

In occupied Jerusalem, the soldiers abducted two children, Mohammad Ala Husseini and Yousef Sa’ad Husseini, from their homes in the Old City.

The soldiers also invaded Silwan town, south of the Al-Aqsa Mosque in Jerusalem, and fired many gas bombs and concussion grenades at Palestinians, who protested the invasion, and many surrounding buildings.

In related news, an Israeli court sentenced Fadi Elian, one of the civilian guards of the Al-Aqsa Mosque in Jerusalem, to three years in prison.

Fadi, a married father of four children, was abducted on December 21, 2021, after the army demolished his flat and several flats of his family members, in addition to one shed, and uprooted his land.