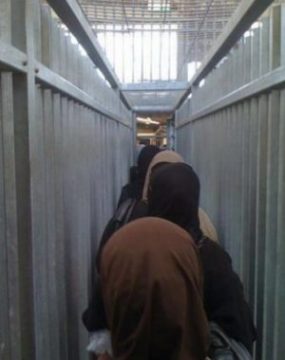 Israeli soldiers kidnapped, on Thursday evening, a young Palestinian woman at the Qalandia terminal, north of occupied East Jerusalem. The army also closed all roads leading to a village near Ramallah.

The Israeli army claimed the soldiers searched the woman and located a knife with her, and that she “was planning to carry out a stabbing attack.”

It added that the young woman, 21, approached the terminal through a lane only dedicated for vehicles, before the soldiers stopped and arrested her, and took her to an interrogation center.

In related news, the soldiers installed roadblocks closing the three roads leading to Deir Netham village, northwest of the central West Bank city of Ramallah, and imposed a tight siege on the town.

The soldiers conducted extensive searched of cars and residents, in addition to inspecting the ID cards of dozens of Palestinians.

The army also distributed leaflets threatening to tighten the siege, and keep the village closed, should the Palestinians “continue to hurl stones at settlers’ cars and army vehicles.”