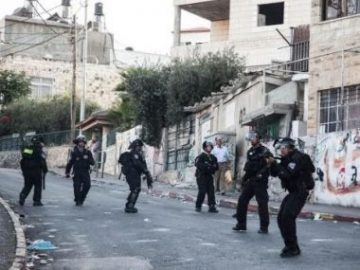 The Palestinian Prisoners Society (PPS) has reported that Israeli soldiers have kidnapped, on Thursday at dawn, eight Palestinians, in several communities, in the central West Bank district of Ramallah. 36 Palestinians, including several children, have been kidnapped in different parts of the West Bank at dawn.

The PPS said the soldiers surrounded many communities in the district, before breaking into homes and searching them, and kidnapped eight Palestinians.

In related news, the Tulkarem office of the PPS has reported that Israeli soldiers have kidnapped, on Thursday at dawn, seven Palestinians in Nour Shams refugee camp, east of the Tulkarem city, in the northern part of the occupied West Bank.

In addition, the soldiers invaded al-‘Isawiyya town and at-Tour village, in occupied East Jerusalem, searched many homes, and kidnapped 16 Palestinians before moving them to detention and interrogation centers.